A conducting disk with radius $a$, height $h \ll a$, and conductivity $\sigma$ is immersed in a time varying but spatially uniform magnetic field parallel to its axis:

Tethers can use the velocity of a spacecraft through the Earth’s magnetic field to generate electrical power. Alternatively, electrical currents pushed through the tether might be used to change the spacecraft velocity for either propulsion or for braking and reentry. Several ‘space tether’ experiments have been flown, to investigate the possible use if Faraday’s law for power generation and/or propulsion. Examples are the 1996 joint US/Italy effort to deploy a 20 km tether from one of the space shuttles to generate power, or the European Space Agency’s Young Engineers Satellites (YES2) experiment that deployed a 31 km tether as a means of reentry for a small payload dropped from a Russian Foton spacecraft.

We have an infinitely tall solenoid (radius $R$, $n$ coils per unit length). Wrapped around it is a single loop of wire (radius $r$, centered at the left edge of the solenoid, shown below). 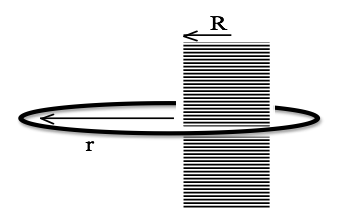 Two circular loops of wire are arranged so that they lie in the same plane and are concentric. One loop, of radius $a$, is TINY, much smaller than the other, which has radius $b$, i.e. $a«b$.

5. Project Problem - Building your paper I

To help you start building your paper, this homework problem asks you to summarize your background research so far. I am looking for about 4-5 paragraphs on what you have learned so far with references. Think about writing this as part of your eventual paper, so work to write something that is coherent and tells a complete story. Make sure you check it for spelling and grammar. This is your chance to make headway on the eventual project that you will turn in soon.

In writing this think about:

You will turn this in using your GitHub repository.