There are three physics problems this week, but the first two are quite similar…

1. Spring constant of an atom

In class we have modeled an atom as an electron with mass $m$ attached to the heavy nucleus with a spring. This atomic spring has zero equilibrium length and spring constant $k = m\omega_0$. Here we show that this model, though crude, is not crazy. Quantum mechanics tells us that in the ground state of hydrogen, the electron wave function is a spherically-symmetric cloud of charge centered on the atom. So, without too much violence to reality, we can model the electron as a uniform sphere of charge of radius $R$ = Bohr radius = 0.53 angstroms). When an external E-field is applied, the nucleus is pushed one way and the electron cloud is pushed the other way, so there is an induced dipole moment. We assume that the electron’s sphere of negative charge is not distorted in shape when it is displaced. We also assume that the nucleus is so heavy that it remains stationary, while the electron cloud can oscillate about the stationary nucleus. 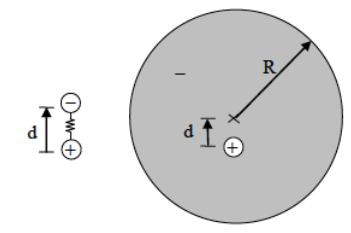 When we first studied polarization in matter, we used a very simple atomic model to estimate the atomic polarizability from a static electric field. Now let’s apply it for non-static fields.

Consider a neutral plasma (gas of electrons and positive ions), with electron density $N_e$. At high frequencies, because the ions are very heavy, we can consider them to be essentially fixed and any current due solely to the light electrons. The total charge density can be set to zero for an electrically neutral gas.

Make sure to read the feedback that you received on your figure/models and think about how you and your partner are going to work through these details.

At this point, you should produce draft figures for poster with captions. You should have pressed onward with your calculations and produced appropriate figures for your poster with captions. The “graphic” and caption should be turned in. These need not be complete in the sense that you should continue working on your calculations and models until the poster is turned in. By draft, I do mean draft, so any figures that you are thinking about putting in the poster, please include them in their current form. Make sure to give me enough information to:

In addition, please continue to reflect on:

You will turn in both your “notebook” and your self-reflection using the same GitHub repository you started for Project 2. Make sure that you sync your repository first to get the new feedback!