Space Probe #1 passes very close to earth at a time that both we (on earth) and the onboard computer on Probe 1 decide to call t = 0 in our respective frames. The probe moves at a constant speed of 0.5$c$ away from earth. When the clock aboard Probe 1 reads t = 60sec, it sends a light signal straight back to earth.

The mean lifetime of muons is 2 $\mu\text{s}$ in their rest frame. Muons are produced in the upper atmosphere, as cosmic-ray secondaries.

4. Dealing with simultaneity and observations

It is important to understand that the effects of special relativity are in no way due to the fact that light travels at a finite speed, but rather due to the fact that the speed of light is the same finite quantity in any inertial reference frame. We can always take into account the time it takes for light to travel some distance, and in fact, we must do so in order to ensure that all the local clocks at rest relative to each other in our frame of reference are properly synchronized. The goal of this problem is to understand the difference between what a single observer perceives (with her eyes), and what a system of local observations made with synchronized clocks will record. The main issue is that a single observer can only perceive information that has actually had time to reach her. This means the one observer is only going to see things as they arrive, usually delayed by the speed of light from where the events actually happened. Things that happened farther away, but at earlier times, will be arriving at the location of a single observer at the same time. Consider a rod of proper length $l_0$ , moving at speed $v$, relative to frame S. Careful measurements made by local observers in S will show that the rod has the contracted length: $l = l_0/\gamma$. 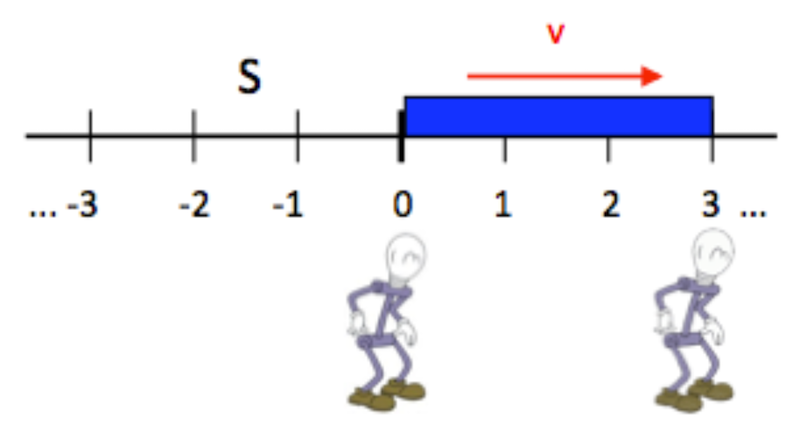 But now consider what is seen by a single Observer Q: 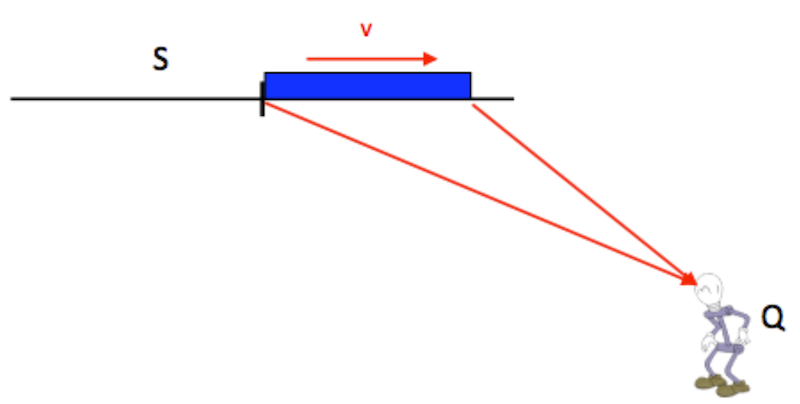 What Observer Q sees at any one instant is determined by the light entering her eyes at that instant. Now, consider the light reaching Observer Q at one instant from the front and back ends of the rod.

You’ve been working on this project for a while now and this will be the last formal project problem. Think about what feedback you want from me regarding your project. What would be helpful? What do you need some direction or instructions on? Think about what would help you the most to make a successful poster in a couple of weeks. Write up a short document outlining what feedback you feel that you need and direct me to the document(s) to review.

This kind of work models what your advisor (or boss) might do when you are presenting a project that you’ve been working on. You know the details of the project better than the advisor (or boss), but you might still want help thinking about the big picture or, perhaps, some specific details that you want to check.

As usual, commit these changes to your repository.