Homework 8 finishes up our discussion of the relaxation methods with a 2D problem. The bonus part of it illustrates the simplicity of problems that cannot be solved analytically. The rest of the homework focuses on another technique for solving for the electriuc potential – using separation of variables in spherical coordinates – and introduces the concept of the multipole expansions, which is still another way to find the potential in the “far field”.

1. Method of Relaxation for Cartesian Problems

One of the major properties of a solution to Laplace’s equation is that the value of the potential at a point is equal the average of all the points surrounding it (i.e., a sphere in 3D or a circle in 2D). We can exploit this property to solve Laplace’s equation numerically by successively computing the average value of the potential at a point on a mesh (a grid of 2D points in this case) based on the 4 other points that surround it (see the figure below). 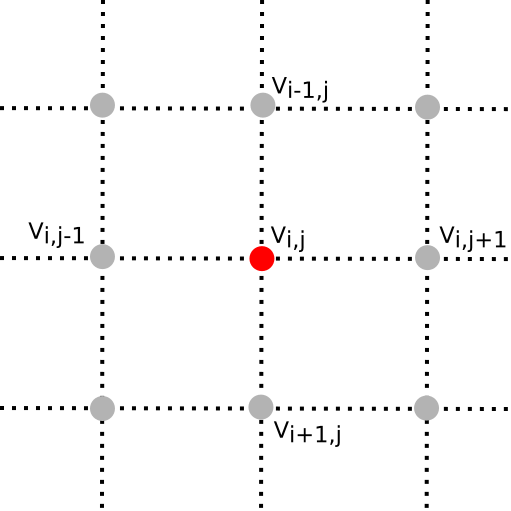 To be explicit, in the simplest relaxation codes, which can run for an inordinate amount of time given the size of the mesh and the error tolerance demanded, we replace the value of the potential $V_{i,j}$ with the arithmetic average of its closest neighbors on the mesh:

2. Sphere with a known potential

We have a sphere (radius, $R$) where we have glued charges to the outside such that the electric potential at the surface of the sphere is given by:

where $k$ is some constant.

In this problem, you will develop the general solution to Laplace’s equation in cylindrical coordinates where there is no dependence on the $z$ coordinate (i.e., where we have cylindrical symmetry).

This problem is tough. But here’s a little help. The general solution for the electric potential in cylindrical coordinates (with cylindrical symmetry) is:

You will not get full credit for this problem unless your work clearly shows how you this solution is developed.

4. Zen and the Art of the Multipole Expansion

Developing intuition about the dominant contribution to the field that you are looking at will serve you very well in the future. In this problem, you will look at a few charge distributions (blue - positive charge; orange - negative charge) and discuss what the dominant contribution (monopole, dipole, quadrapole) to the field would be far from the distribution (as $r \rightarrow \infty$).

For each distribution below, discuss which contribution to the multipole expansion dominates at large $r$. Explain how you can tell this is the dominant contribution (use equations, pictures, and words as you see fit).

5. The Beauty of the Multipole expansion

The multipole expansion is a very powerful approximation that arises in a number of different kinds of field theories. The beauty of it is that it can provide a simple approximate form for the field in question far from the sources that produce the field. Often, this is helpful when solving problems where you only care about the dominant contributions because the others only provide small corrections to the behavior.

In this problem, you will explore the the multipole expansion for the charge configuration shown below.